Returning to the GT4 Supercup, Tecserv UK, CEO Grahame Tilley headed to Kent for the final races of his season at the legendary Brands Hatch circuit.  His aim was to secure an overall third place for the season.

The weekend actions saw the Leicestershire based racer endure some turbulent times but ultimately his goals were achieved following two podium finishes from his three races.

His qualifying rounds hadn’t gone well, as Grahame decided to run his RAW Motorsports Ginetta G55 on slick tyres, whereas the rest of the field opted for wets. The decision left the Tecserv CEO starting from the back of the grid.

Commenting he said, “It was a gamble, but sadly, it was too humid for the track to dry properly and I came off the track damaging the corner of the diffuser. I then did a pit stop to change to wets and I lost the paddleshift gear change, which was quite frustrating.”

This meant Grahame had to start from the back of the grid in the first race and he quickly gained two position on his opening lap, but ultimately he struggled to adapt to the conditions and could only manage to hold on to third place.

Tyres were still a lottery for the second race with Grahame and Championship class leader, and ultimate winner, Colin White both opting for slick tyres, whilst the rest of the field opted for wet tyres. 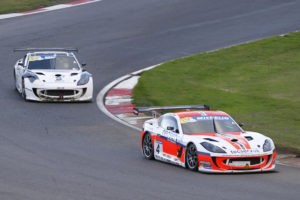