TWO PODIUMS OUT OF FOUR RACES AT KNOCKHILL 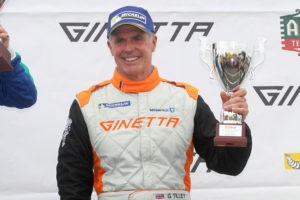 The first race of the weekend was the replacement for the postponed Snetterton finale, leaving Grahame to start second in class in his RAW Motorsports Ginetta G55.

With limited pre race testing, Grahame felt as though he was still learning in the circuit in race one. Commenting he said, “I got hit by Chris Ingram on the first lap and it knocked my steering out,” he explained.

Having fallen back after the contact he continued to challenge Mike Newbould to regain fourth in class and finally overtook him, but another collision dislodged the rear wing which eventually came off and left him struggling to maintain his lead, leaving Newbould to race through on the final lap and a final position of fifth in class in this leg of the race.

A first lap shunt meant the first five laps of race two were driven from behind the safety car. When the green flag was lifted, Grahame soon made progress, ousting Fraser Robertson for third in class. He was catching Chris Ingram too for a while, and they shared fastest laps in their duel. But gradually the gap began to open in the closing laps, leaving Tilley to settle for third.