Racing driver Grahame Tilley, who is CEO of fire and security solutions company Tecserv, achieved two podiums from three races at Donington Park, taking his first win of the season in the Ginetta GT4 Supercup.

His RAW Motorsports car had qualified third in the Amateur class for the first of the weekend’s races, but Grahame still felt there was more to come. “It went OK but we are still learning and keep trying changes,” he said.

At the start of Saturday’s race he lost out to his rivals on the opening lap. “I lost out at Redgate but was catching again and went too quick into Coppice and slid out onto the wet bits with my slick tyres, so had to back off,” he explained.

He had settled in a strong third but as the pair ahead intensified their duel, it allowed him to close in on them too. “I could see something might happen and they collided at the Old Hairpin on the last lap which made me the class winner,” he added.

Starting from 11th overall and class pole for Sunday mornings second race, Grahame was disappointed with his start and was down to fourth at the end of the opening lap. “It was rubbish, I had wheelspin and just too slow away.” 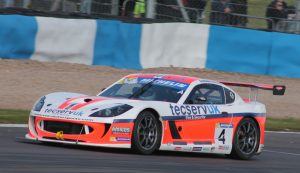